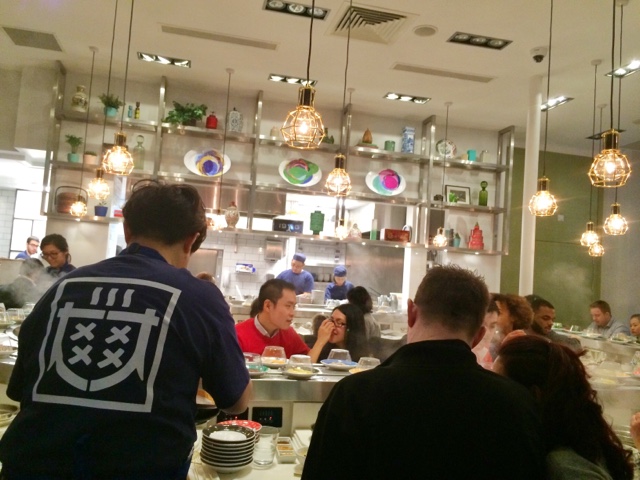 With the new opening of Shuang Shuang in Leicester Square, Vi Vian and I couldn't wait to try it out!

Offering a Chinese cuisine, Shuang Shuang specialise in hotpot. For those who haven't heard of hotpot before, it's where you add lots of ingredients to a pot of boiling water or flavoured soup and enjoy it with different dipping sauces.

I'm used to the having hotpot but usually at Chinese New Year and at Christmas so knew what to expect and how it worked. It is quite a sociable experience as you can share and serve food to each other. There's not really any rules to hotpot apart from making sure that your meat and fish are cooked.

When we arrived, we were seated in less than 5 minutes near the entrance. We were given lots of help, whether it be from the food menu, drinks menu, coloured plate key or members of staff. 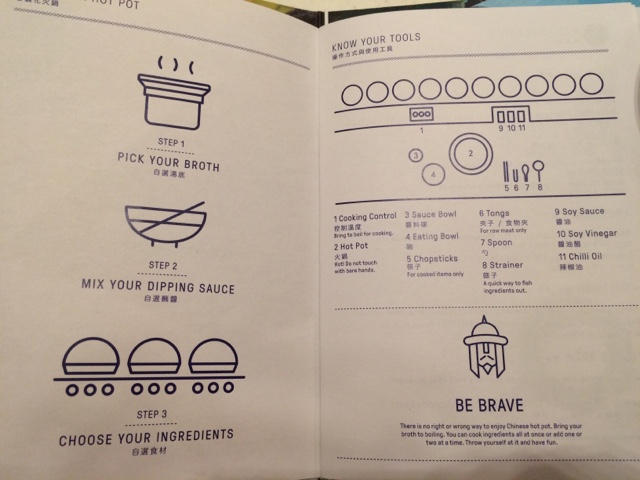 It soon became too cold to sit where we were and asked to be placed further inside the restaurant where we thought it would be warmer. Unfortunately, there was still a draught so I couldn't feel my hands for the duration of the meal. The only warm place is to sit in the centre of the restaurant, as was discovered by Cheeky Bellini - another food blogger who we happened to bump in to! I also met the lovely Crispin and his friend Joe - thank you for the photo! 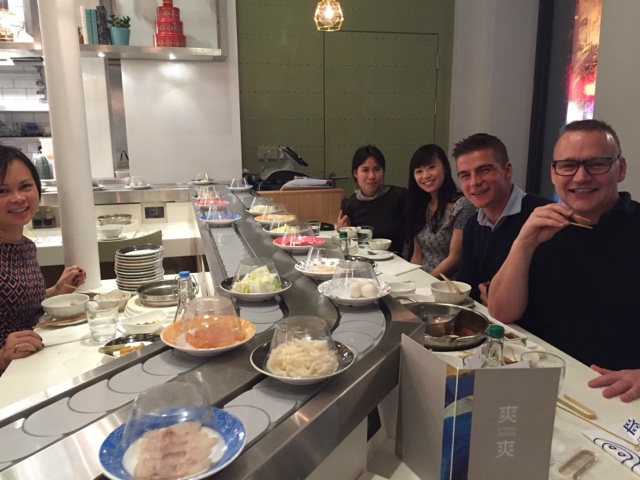 The layout of the restaurant is similar to Yo Sushi - with the conveyor belt carrying little plates of raw ingredients and customers being able to select what they like. Instead of tables, it is one continuous table top with individual induction stoves embedded into the surface. 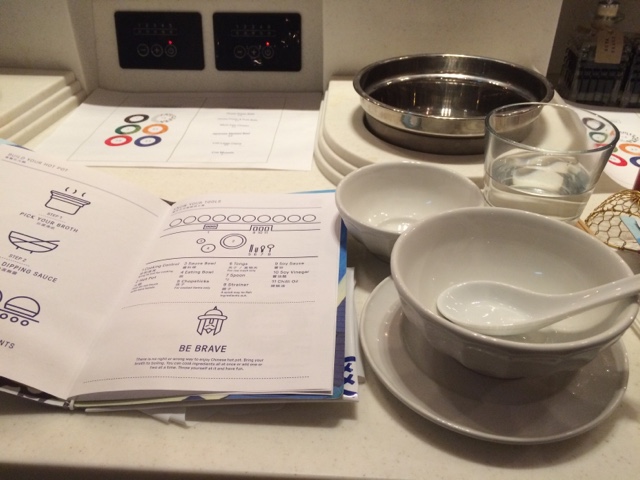 How it works
The menu features 5 different broths: Mala, Black Bird, Lamb Tonic, Fish Pond and Temple Brew, which is vegan. After selecting one, it comes with 3 different dipping sauces. Then you simply pick any of the plates off the conveyor belt, which are priced according to their colour and will be totalled at the end of the meal. If you can't find what you're looking for then just ask a member of staff. Black plates are £1, White plates £1.20, Green plates £2, Yellow £2.25, Red £2.90 and Blue £4.25. There are other dishes that aren't on the conveyor belt so make sure you have a look at the menu! 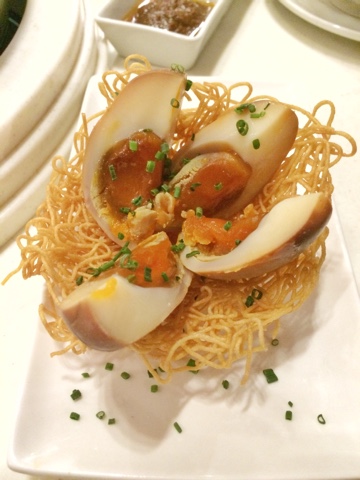 We both found the jasmine egg too florally and a little odd. It was very well presented in a little noodle nest but I think it would have tasted nicer if it was served hot. 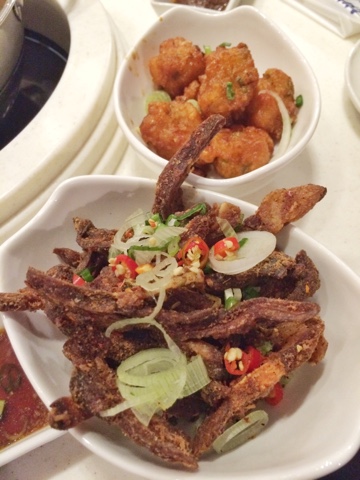 Cheeky Bellini kindly let us try the pig ears she ordered and they were the better option. Crunchy, deep fried pieces with a hint of spice. Yum! Sorry Vi Vian for not listening to you! 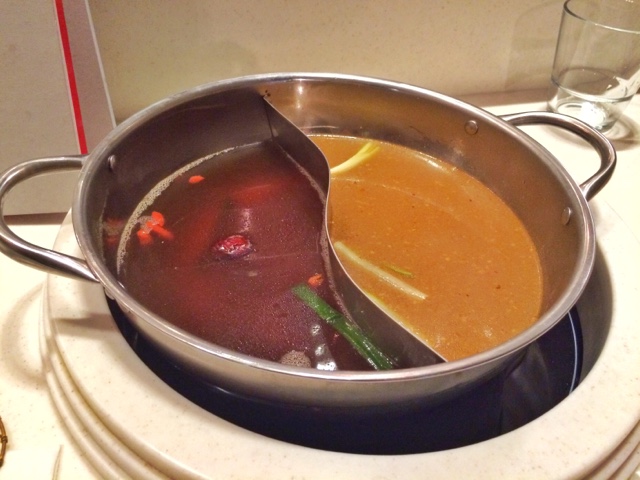 I quite like the broth with the sweetness from the dates, wolfberries and black chicken but after each top up (you can have unlimited refills), the taste became very salty so recommend opting for hot water between each top up.

I didn't try and but the streaky bacon was very good and Vi Vian loved the broth more than anything else so probably should have been offered a straw :p 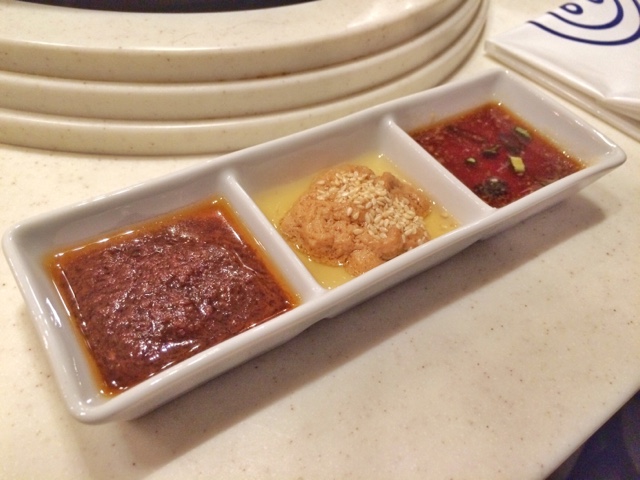 The dipping sauces that came with the broth were not explained so we had to guess but I would avoid the sesame one (in the middle) as it was quite bitter and quite paste like.

Dessert
For dessert, we both wanted the Soy Ice Cream and Candied Ginger (£4.50), which was just as well as that was the only choice they had left! When it arrived it wasn't what we had expected. 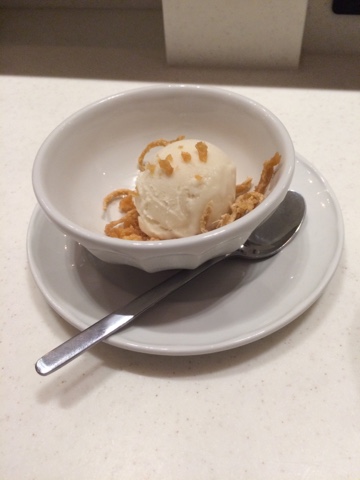 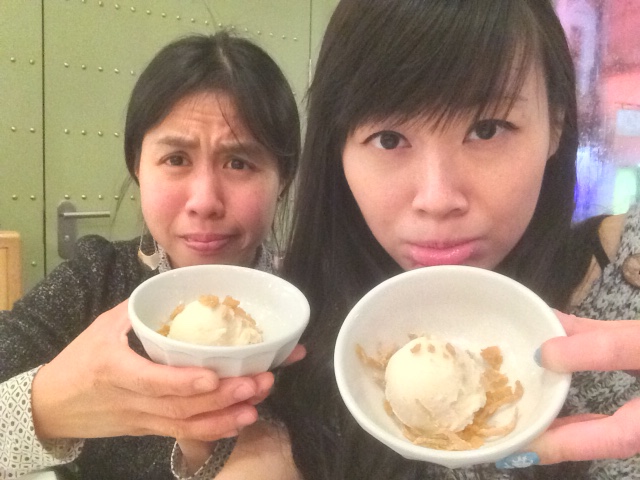 It was a very small portion, with a simple presentation. It didn't seem worth £4.50 but nonetheless I did like the taste of it - a very good palette cleanser with the varying strengths of crunchy ginger strips.

My final bill came to £16.77 including the 30% soft launch discount. After a starter, mains and dessert, I left feeling stuffed :)

Overall, I think Shuang Shuang is a great place to go to if you're not familiar with hotpot and love trying something different. It's quite interactive as you get to cook your own dinner. It's suitable for eating on your own or as a couple but not for big groups. Even though it's only been open for a few days, I was impressed with the service and am sure I will be back again.