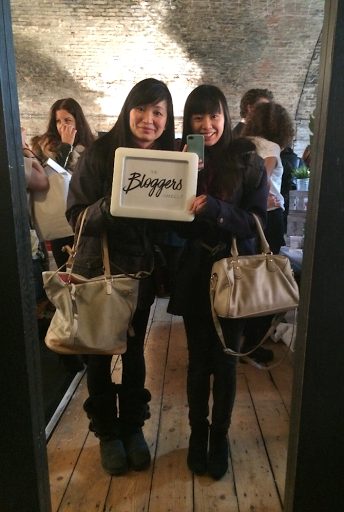 I was really excited about going to this event as it'd be my first fashion one. I was so excited I got the dates wrong and almost turned up 2 weeks early - I even dressed up in all black!

I decided to take my sister along with me as she really enjoyed the last bloggers hangout event. It took a little while to find the venue but once we found the place, there were loads of people packed into the arched hall. 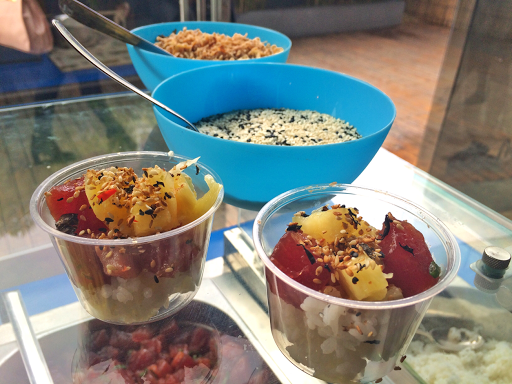 Starting with the nearest stall by the door, we tried The Hawaiian Fish Company, who were serving Hawaiian food made with rice, tuna sashimi, pineapple and topped with poke seeds, the multi-textured combo reminded us of durian and rice (Malaysian thing). What worried me was being told that the tuna had been picked up fresh from Billingsgate Market that very Monday morning.. Billingsgate market doesn't open on Mondays.. or Sundays.. (despite being told that the tuna was picked up on Sunday). So that kind of put me off the finishing the fish.

There were queues everywhere so we visited stalls in a very unplanned order. 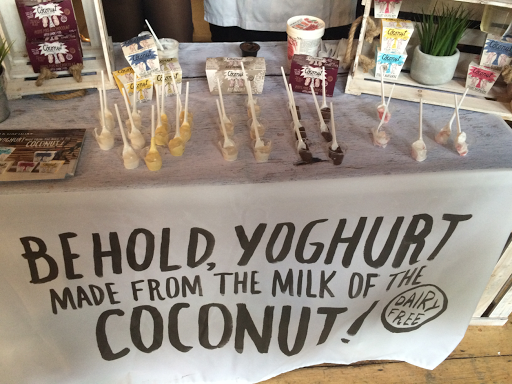 Coconut Collaborative caught my sister's eye and she encouraged me to try the frozen raspberry coconut yoghurt. Now I'm not a raspberry fan but this was delicious! It was creamy, fruity and not sickly sweet or sharp. I think this flavour will be joining my freezer! 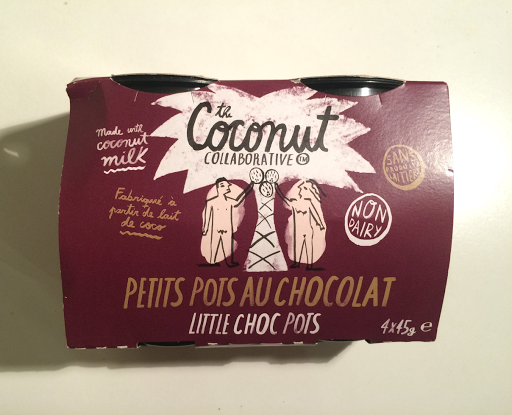 The chocolate puds were also creamy and felt indulgent despite being dairy-free. I was so happy when I was able to take home a pack of 4 little choc pots :) Thank you Coconut Collaborative! 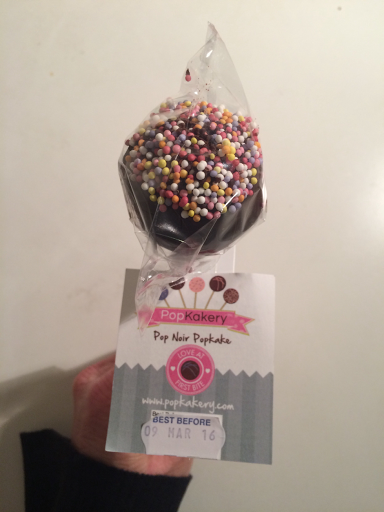 Next to visit, PopKakery. I've never had a cake pop before as I'm usually too greedy to be enticed by a little ball of cake but these looked so cute and sweetly decorated! I found the cake part more like a brownie as it was quite dense but loved the chocolate shell :) We were given a cake pop to take home and a chance to enter their competition of winning a hamper. Here's our entry :p 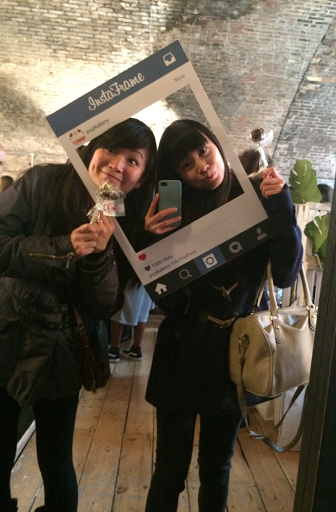 Spotting Pudology's banner in the background, we rushed over to their stall. 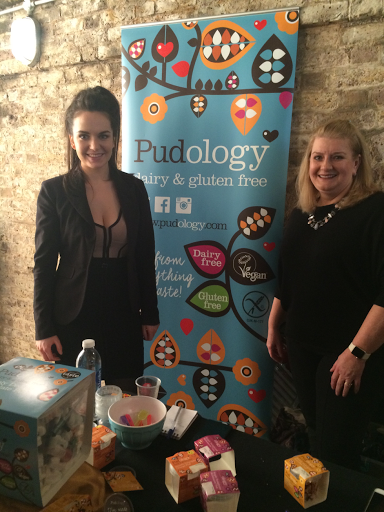 Ever since I discovered them at VegFest 2015, I've been a fan ever since - even bought all the pots at Holland and Barrett's Camden branch :p These little pots of yumminess come in a range of flavours and are all gluten free and vegan, making it very hard to choose a pud to take home! 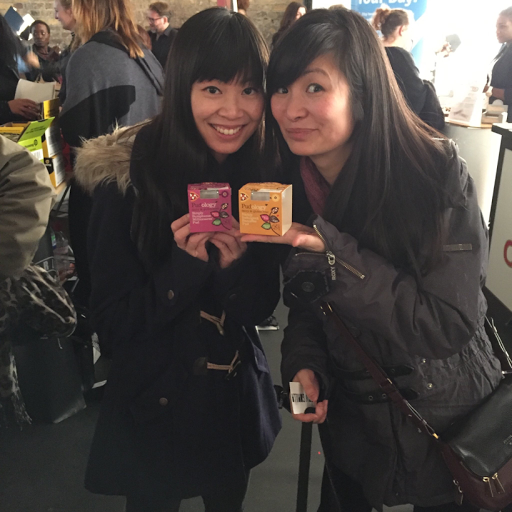 Thanks Pudology for this great photo of us :)

Pop Cycle
We met the lovely George at her bicycle stand, where a handmade box contained deliciously flavoured ice lollies. From alcoholic ones to non-alcoholic ones, they are all vegan and are also available in smaller versions, perfect for kids! I tried the mint chocolate one and loved it. It had a good chocolate flavour with a smooth taste of peppermint at the end of it. I thought there were dates in it but it was raw cocoa instead. I loved the blood orange flavour, it was so refreshing and not sharp overly sweet! Would definitely have that in my freezer too :)

Raw Gorilla
I thought this brand was actually Rude Health as I saw the almond milk bottle! Turns out it was to go with the healthy cereals they make :) 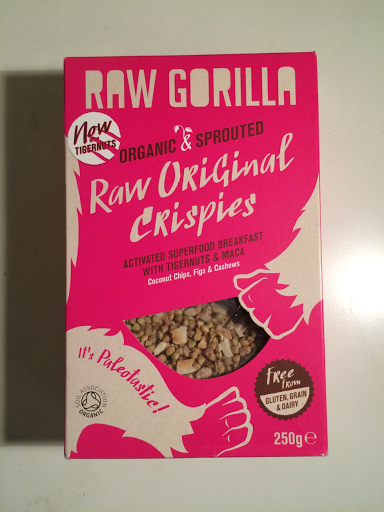 These are no ordinary cereals, they are raw and also gluten-free and vegan. We sampled the Raw Original Crispies, which contain tiger nuts. Never heard of tiger nuts? They're not actually nuts but tubers of a plant but have taste and crunch of a macadamia nut and are good for you. 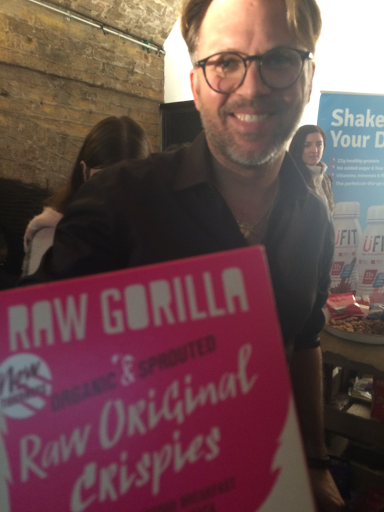 Frasier kindly let us take a box home :) I tried mine with hazelnut milk and found the cereals exceedingly crunchy - good for strong teeth! 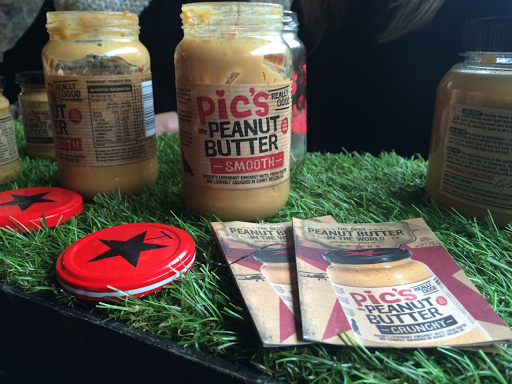 Pic's Peanut Butter
If you're looking for a healthy peanut butter with nothing but just peanuts, you need to try Pic's. With no added sugar or oils, you get the full peanut butter flavour. Available in crunchy, smooth and cashew nut, my favourite was the crunchy. I found the smooth to have less flavour and took a while to come through.

Get Buzzing
When I was told these bars were nut-free and vegan, I was impressed! However it turns out the owner had lied to me and I ate the sample they had given me and now have an allergic reaction. 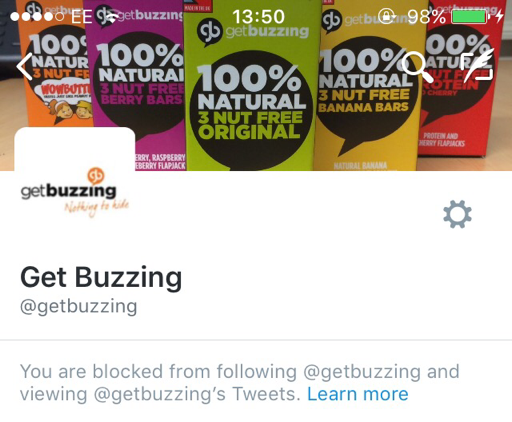 After questioning them on Twitter, they blocked me, gave no apology and showed no concern to if I was ok!
The owner treated my allergic reaction as it was a joke and replied with that she "would have offered me some free bars!!"
Please feel free to Tweet them your thoughts if you're not afraid of being blocked ;)

Naturigin
If you're fed up of all those chemicals found in hair dyes, then look no further. Naturigin has 19 different colours to choose from and uses completely natural ingredients. 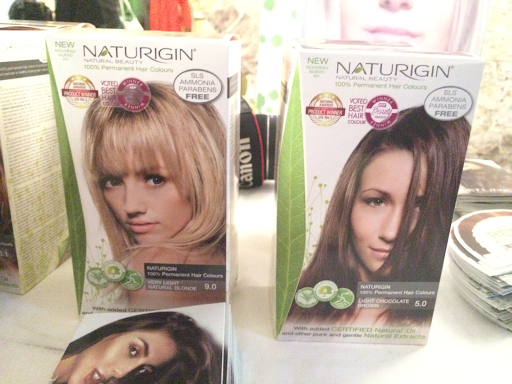 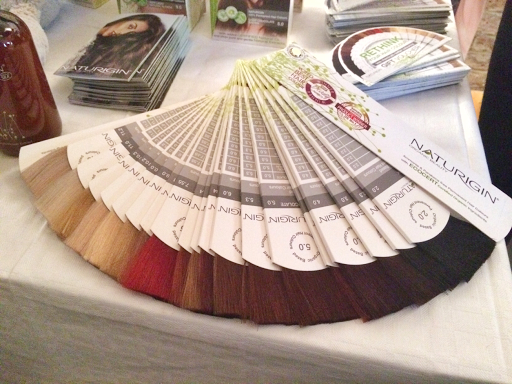 This permanent hair dye can last up to 8 weeks. I haven't tried the hair dye just yet so will update this as soon as I have :)

The bold, brightly coloured packaging by Bluebird Tea Company caught my eye as well as the word 'matcha'. 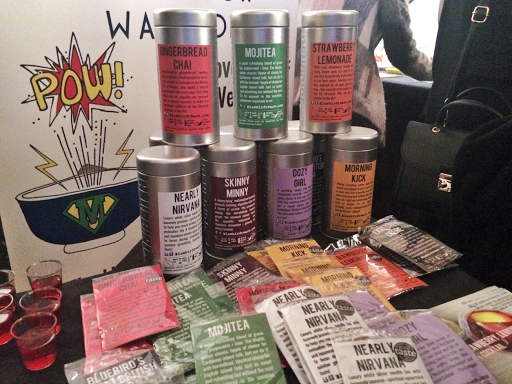 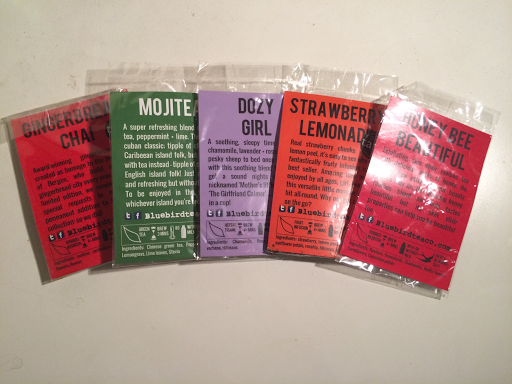 After smelling the Gingerbread Chai tea, I had to take a sample along with 4 other flavours. Thank you Bluebird Tea Company!

At first I thought Miracle Tree specialised in air fresheners but they actually are all about teas. 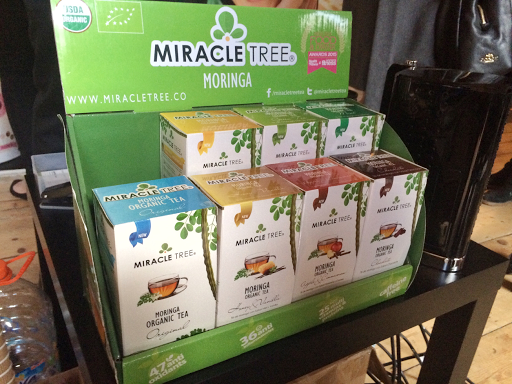 There were so many flavours to pick from but after hearing chocolate tea, I had to try some. I found the smell enticing but very different to the taste. It tasted more like oats to me. I was told they could make it taste more chocolately but all the amazing properties would be lost. 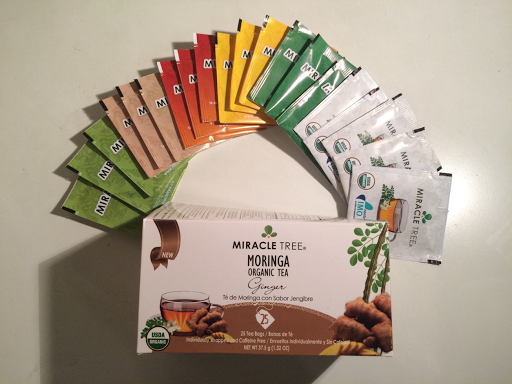 I was so surprised to be given so many teas to take home! Thank you Miracle Tree.

Naturally Coconuts
Now this is not just another coconut ice cream. I'm not a big fan of coconut flavoured things but I could hardly tell  that it was made with coconut cream.
I decided to try the mint chocolate chip and fell in love with it! The natural greenness comes from the spirulina mixed with it. I love the chocolate chunks with the creamy minty ice cream. Pure Yum. 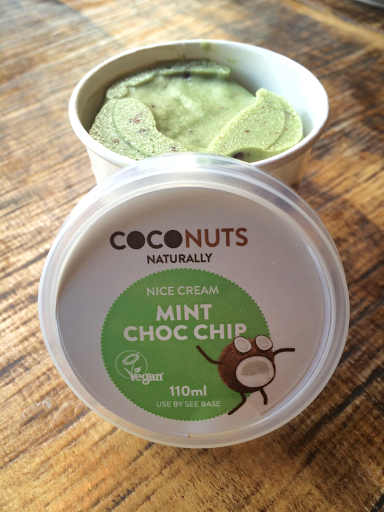 Even though I had a 45 min journey home, I couldn't resist taking a little pot back with me.

Pura Vida Raw Bakery
I have yet to try the broccoli bread sample I was given but their cherry juice sure packs a punch! If you like cherries with a sour kick, then you'll love Pura Vida's cherry juice.

Cranes
These boys from Cambridge know their cider. 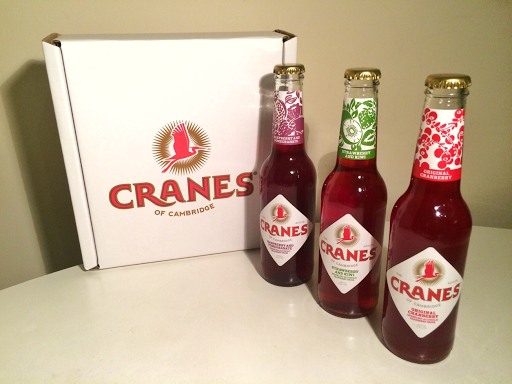 After sampling the strawberry and kiwi flavour, I couldn't wait to take home a box containing 3 different flavours. When I drank the strawberry and kiwi one at home, it tasted flatter and more like Toffee Apple, not sure if that was the Stevia sweetener coming through or the cranberries but it was still nice. You can definitely taste the difference as it's not sickly sweet like Koppaberg as it contains less sugar. It was nice to meet you Ben and Dan!

Heaven by Deborah Mitchell
After speaking to the very friendly Lauren, it was great to learn about Heaven skincare products and even take one home! 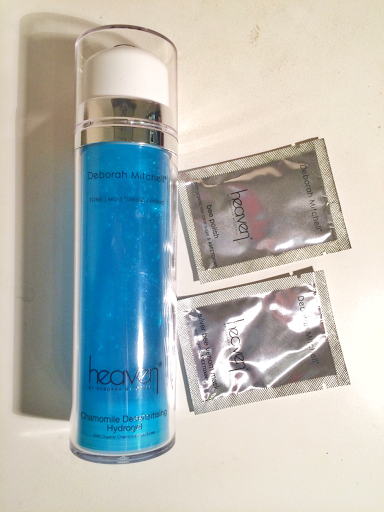 After speaking to the very friendly Lauren, she gave us a bottle of Chamomile Densitising Hydrogel, which is suitable for dry, sensitive skin and eczema as it calms down and redness and hydrates the skin. I've been using it for 3 days now and can see positive results! My skin not only feels smoother but my random spots have gone down too. Best of all, this gel comes in a beautiful icy blue :) 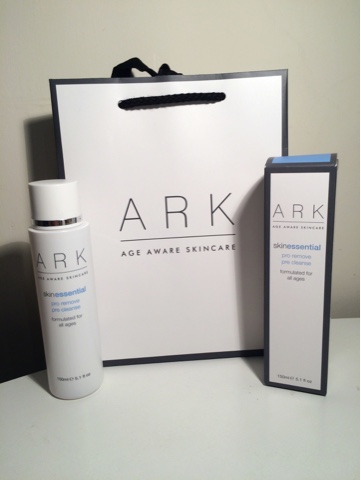 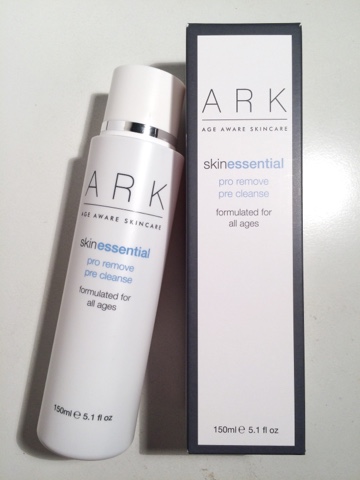 It's formulated for all ages. It removes make up, daily debris and excess sebum. I was expecting it to be a thick liquid soap but I was surprised to find it was more like baby oil and smelt of lavender. I have sensitive skin and suffer from eczema but found that this product didn't irritate my skin so will be continuing to use this product :)

Thank you The Bloggers Hangout for such a great event. I had a great time and can't wait for the next one! :) 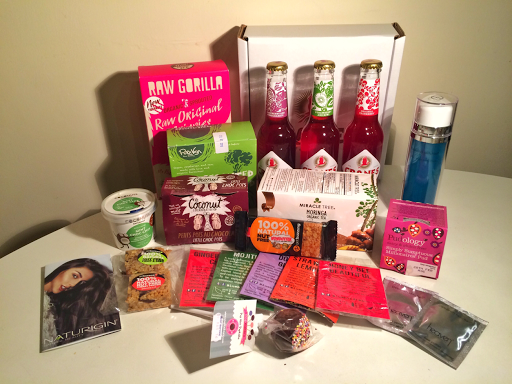